In the coastal rainforests of western North America, harvesting practices in the early 20th century removed only large, sound logs from the site often leaving large percentages of the aboveground biomass on the site. This type of harvesting was considered “wasteful” from an economic viewpoint and a barrier to forest regeneration as well as increasing fire hazards. In response, foresters started practicing whole tree harvesting (removal of all aboveground tree biomass from the site), with clearcutting becoming the predominant method (Franklin et al. 1997). 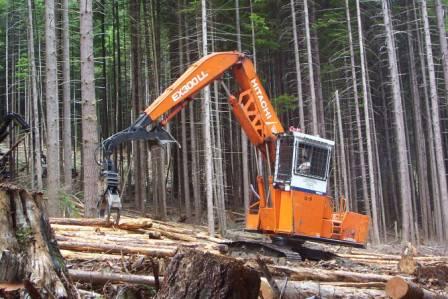 Harvesting on one of the STEMS sites
(photo by Dr. S. Grayston)

Until the mid-1990s, most harvesting on public lands in British Columbia (BC) involved clearcutting (practiced on 87% of the area harvested), while various partial cutting systems were done on 13% (BC Ministry of Forests, Mines, and Lands, 2010). Advances in knowledge and a shift towards conservation of biological diversity led to the use of clearcutting with reserves and variable retention systems. Proportion of public land harvested by clearcutting decreased to 44% by early 2000s, with the remaining 56% harvested with partial cutting systems (BC Ministry of Forests, Mines, and Lands, 2010). Forest management has been shifting towards adaptive ecosystem management, which seeks to expand the range of environment and social goals of forest management. For example, in 1995 the Scientific Panel for Sustainable Forest Practices in Clayoquot Sound produced a report which endorsed the implementation of alternatives to clearcutting (Clayoquot Sound Scientific Panel 1995. First Nations Perspectives). They recommended implementing alternative silvicultural treatments to clearcutting, such as variable retention harvesting (VRH).

VRH is a harvesting system in which a proportion of trees is left on the site after harvesting. Harvesting can encompass wide spectrum of retention levels (from 10% to 90% retention), but historically silvicultural regeneration systems have only used a small part of the retention spectrum.  Clearcut harvesting is defined as: “an area in which the above- and below-ground influence of the trees has been removed in more than half the area” (Kimmins 1997). Therefore, there can be overlap between  what is defined as clearcutting and VHR, but the focus of VRH systems is on what is left behind (biological legacies) on the site rather than what is taken away.  Biological legacies are defined as “…the organisms, organic materials, and organically-generated environmental patterns that persist through a disturbance and are incorporated into the recovering ecosystem…” (Franklin et al. 2000). Thus, VHR seeks to manage both living and dead trees to achieve management objectives. The percentage of trees retained depends on the specific management goals of the harvesting.

(2) enriching regenerating forests with structures otherwise absent after harvesting, and

(3) enhancing connectivity of fragmented late successional forests by increasing the complexity of forest types across the landscape (Franklin et al. 1997).

For example, the management of coarse woody debris (CWD), (larger diameter decaying wood) serves as illustration as to how VHR can enhance forest structure, and thereby affect forest ecosystem functioning and biodiversity. Standing CWD (snags) are used by birds for nesting and feeding on the insects living in the wood. Wood decay fungi decompose the snags, which eventually fall onto the forest floor, and then can serve as habitat for mammals, insects, and microbes. Fungi decompose the rotting CWD and organic compounds are slowly incorporated into the soil as organic matter, serving as a source of nutrients and carbon.  On the landscape level, forest patches that contain CWD can serve as dispersal points for organisms into new habitats. (Franklin et al. 2000).

Silviculture Treatments for Ecosystem Management in the Sayward (STEMS)

The Silviculture Treatments for Ecosystem Management in the Sayward (STEMS) is a large-scale experiment in the Sayward Forest on Vancouver Island initiated to provide a quantitative assessment of biological, social, and economics impact of seven silvicultural systems.  STEMS evaluated five VHR treatments along with two extended rotation treatments. In the case study prepared for this soil management course, we focused on two VRH treatments (aggregate and dispersed retention), uncut, and clearcut treatments.

Researchers have incorporated soil properties and soil microbes into the assessment of VRH treatments because protecting soil quality is seen as essential to sustainable forest management.  Living trees exert a major influence on soil processes; hence, a primary STEMS objective in assessing aggregated and dispersed retention was to determine how the “shadow of influence” extends from trees into the surrounding soil.