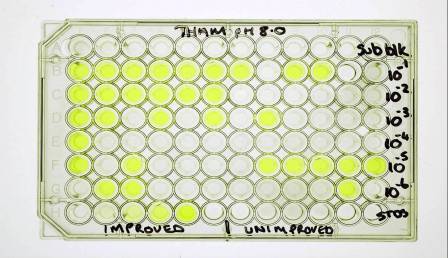 The cryptic nature of micro-organism can be overcome by using molecular techniques to assess microbial population dynamics. Phospholipid fatty acids (PLFA) are used because they are mainly characteristic of living cells (degrading rapidly after cell death) and cover the entire community. Most fatty acids are widespread in microbes, but a relatively small number of fatty acids are specific to target organisms. However, the variability in fatty acids is greater in bacteria than in fungi, thus PLFA analysis provides a greater resolution of the bacterial than fungal communities. Fatty acids are classified by number of carbon atoms and double bonds, with reference to location on the molecule. 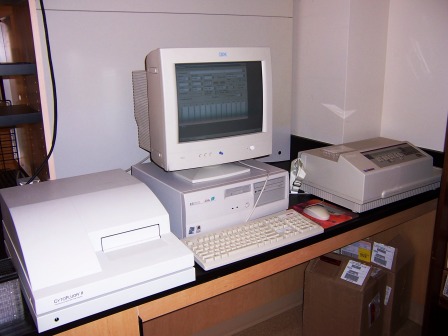 The fluorimetric and colorimetric plate readers used to measure either visible color or fluorescence
(photo by Dr. S. Grayston)

Samples for PLFA analysis are freeze dried, then placed in an extractive medium (a mix of chloroform and methanol). The methanol fraction contains the phospholipids and is subjected to addition of another chemical agent (methyl nondecanoate). This yields fatty acid methyl esters, which are then analyzed using gas chromatograph. In the resulting chromatogram, fatty acids peaks are compared against known standards to connect peaks to microbial groups. 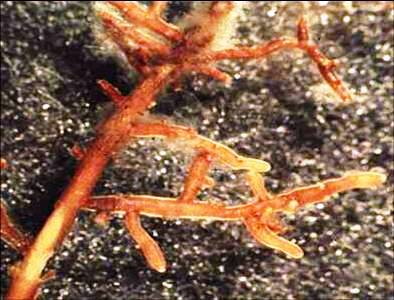 Ectomycorrhizal richness was assessed as the total number of species present in a given treatment unit. Species present were determined using a combination of morphological characteristics and DNA analysis. The samples were first placed into groups based on morphology. Secondly, molecular identification was conducted by comparing ITS (Internal Transcribed Spacer) DNA sequences from experimental samples to ITS sequences from already known species from an on-line database. 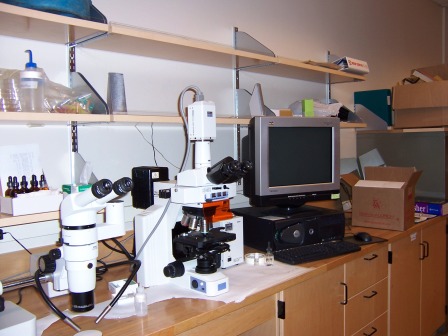